When I first started this blog, there were a handful of movies that seemed natural to discuss.  Good Will Hunting was my first foray into this group, and was followed by Pi, and later Stand and Deliver.  While I have discussed other movies in between, these three are in a class of their own due to the fact that they revolve so centrally around mathematics.  There are a couple of notable exceptions on this list, a regrettable fact which I am in the process of correcting.  Case in point: today I'd like to take a look at A Beautiful Mind.

More successful than any of the three previous films I listed (from a box office standpoint, mind you, not necessarily a mathematical one), Ron Howard's 2001 biopic of mathematician John Nash won four Academy Awards, including the coveted Best Picture and Best Directing trophies.  I saw the film when it came out, but didn't remember much, except for being underwhelmed, and so it was with low expectations that I decided to rewatch the film this weekend.  Should you need a refresher, please take a look at the following trailer.

If the trailer strikes you as unnecessarily saccharine, then you're in luck, because it captures the tone of the film fairly accurately.  But tone isn't primarily what I'm interested in here; as you might expect, I am more interested in how this film portrays mathematics and mathematicians.

If the only mathematician in this film was John Nash, then the film certainly would be perpetuating this misconception.  Even though the film chronicles Nash's relationship with and marriage to an actual female (!), I don't think anyone would try to argue that Crowe's portrayal of Nash is anything but socially awkward.  Consider, for example, this example of his attempt at a pick up line from a scene early in the film: "I don't exactly know what I am required to say in order for you to have intercourse with me.  But could we assume that I said all that?  I mean, essentially we are talking about fluid exchange, right?  So could we go just straight to the sex?"  At the very least, perhaps Nash could have benefited from a dating coach.

On the other hand, Nash's idiosyncrasies are presented as the exception, rather than the rule.  We meet a number of other mathematicians in this film, mostly Nash's colleagues from graduate school, and they all seem normal not only in relation to Nash, but in absolute terms.  None of these characters is explored in much depth, but their presence does offer a counterpoint to Nash's strange behavior, and for that I am grateful.  In the end, therefore, the film both seems to perpetuate this stereotype and go against it.  After all, it shows people who are socially well-adjusted and good at math; John Nash just happens to be the latter without being the former.

- Mathematicians are single-minded of purpose, and have no interest in anything besides mathematics.

Again, although Crowe's portrayal of John Nash somewhat exemplifies this misconception, the supporting characters provide a contrasting view.  Nash certainly fits the mold of a mathematician completely involved in his work.  He is so determined to find his one unique idea, he doesn't even both going to class, claiming that classes "destroy the potential for authentic creativity."  He is not a slacker, though; his time spent away outside of the classroom is always spent inside a library or his dormitory.  The only reason he even scored a date with his future wife is because she asked him, not because he took the time to pursue her (although I'm not sure whether or not this was the case in their actual history).

One could go so far as to argue that it is this obsession with work that ultimately drives Nash insane.  After all, when explaining as an old man how he learned to live with his illness, he says "I still see things that are not here. I just choose not to acknowledge them. Like a diet of the mind, I just choose not to indulge certain appetites; like my appetite for patterns; perhaps my appetite to imagine and to dream."  In other words, he associates his illness with the very same creative spark that made him a good mathematician.

Other mathematicians are able to find the work-life balance a little more easily.  Consider, for example, the wise word's of Nash's friend Sol, played by the dude who was Chandler's annoying roommate.  When he goes to visit Nash after he's released from the hospital, Sol tells him that "there are other things besides work."  To this, Nash can only respond, "What are they?"  It's unfortunate that Nash is this way, but at least the film shows that in general, mathematicians need not be. 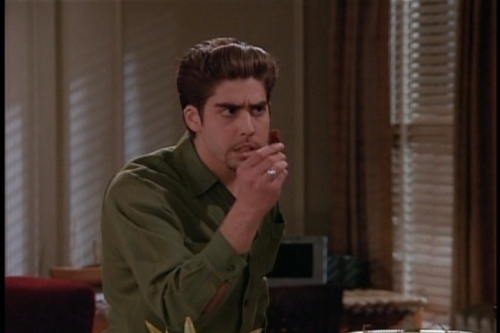 This guy knows his math.

What can I say?  Again, Nash meets this criteria quite nicely, but at least his contemporaries do not.  Then again, there's something to be said for the fact that Nash is often portrayed as a better mathematician - does this mean that to be a truly great mathematician, one must be insane?  On this, the film's answer is a decisive "Maybe."

Take Nash's relationship with fellow colleague Martin Hansen, played by Josh Lucas.  The film initially uses Hansen as a foil to show how superior Nash is as a mathematician.  When they first meet at their student orientation, Nash says, "I read your pre-prints. Both of them. One on Nazi scientists and the other one on, uh... non-linear equations, and I'm extremely confident that there's not one seminal or innovative idea in either one of them."  Boom, roasted!

Later on, however, Hansen is shown as the head of the Princeton mathematics department, a position I'm pretty sure one can't obtain without being a great mathematician.  So does Nash really have the more brilliant mind, or is he just more full of himself?  Hansen's character isn't explored in much detail, so the answer to this question, unfortunately, is not forthcoming.

- It is important to do math on windows, mirrors, or other unconventional writing surfaces.

Check. Come on, guys, seriously?  Isn't it difficult to read things that are written on a window? Clearly, somebody needs to take a trip to Office Depot.

- Mathematics is so inherently difficult and complicated that only gifted people have a hope of doing well in it.

Again, by virtue of the supporting cast, the film manages to shed itself of this misconception.  While Nash does relatively well for himself mathematically, so do his peers, many of whom are presented as being less original than him.  Having a career in mathematics is shown to be just as much a product of hard work as it is natural ability.  Then again, the film only shows mathematicians who were graduate students at Princeton University, so there may be an implied sense that every character must have been gifted to some extent in order to get that far.  I'm willing to cut the film some slack on this, though, since there are more egregious offenders out there (sorry Good Will Hunting, but I'm looking at you).

- Mathematics involves nothing more than tedious calculations and memorization of dry facts.

Nash's passion for mathematics is one of the strongest parts about this film.  He makes it very clear that the beauty of mathematics lies in ideas, and that people with new ideas are the ones who make the greatest mathematicians, not the ones who can multiply numbers the fastest.  As an older man, he can also be seen telling a group of students that mathematics "is an art form, no matter what these people tell you."  The film is ambivalent on many of these issues, but on this one, I'm thankful to say that it bucks convention.

So, where does this leave us?  On one hand is John Nash, who nicely fits nearly every misconception about people who study math, and on the other hand sits a larger supporting cast that doesn't play to these stereotypes, but isn't fully developed.  In the end, the entire affair left me feeling, well, not much of anything.  But to be fair, my expectations going in were much worse.  Credit is due to the film for showing Nash articulate the beauty of mathematics, but I would've preferred to see more focus on Nash's contemporaries.  Nice try, Ron Howard, but as far as math movies go, I think Stand and Deliver still has one up on you.