Big ups to Liz Landau for bringing attention to one of the most important unsolved math problems of our time, the Riemann Hypothesis. Over at the CNN SciTechBlog, she has written a nice article on the problem aimed at a general audience.

This year marks the 150th anniversary of the publication of Riemann's manuscript, where he proposed the now famous conjecture on the zeros of the Riemann-zeta function, and November was the month in which it was published. However, as Landau points out, the exact date of publication isn't known, which makes having a birthday celebration a little tricky. The American Institute of Mathematics picked today to celebrate, and in honor of Riemann talks were held all around the world.

The Riemann Hypothesis has held the attention of the mathematical community for a century and a half, but it's also made occasional forays into the realm of popular culture. For starters, there are quite a few books on the conjecture that are aimed for a general audience (one of the more recent ones is by Dan Rockmore). It has also made cameos in television shows such as Law and Order and Numb3rs. The Numb3rs episode is particularly notable because in it, the Riemann Hypothesis is solved by none other than Neil Patrick Harris. While he may not be a major contender to solve the problem in real life, it may be a bit too early to make a final verdict. 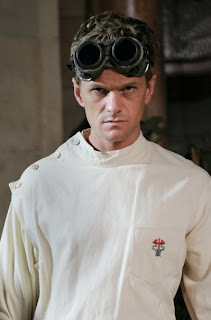 This is what NPH looks like when he thinks about mathematics.

While the Riemann Hypothesis may not be as simple to state to a general audience as, say, the statement of Fermat's Last Theorem, there is ample room for its inclusion in popular discourse. This is important not just because the conjecture excites mathematicians, but also because it shows that the work mathematicians do involves more than multiplying large numbers and being awkward in social situations.

In an ideal world, we would celebrate the Riemann Hypothesis every November 18th, just as we celebrate Pi Day on March 14th. The difference would be that 11/18 would commemorate something substantive within mathematics. For that reason, the idea probably won't take hold. But at least a man can dream. Thanks again, Liz, for doing your part!