Update: Part 3 of this series of posts can now be found here.

A more basic question that is related to both of these is whether or not the two final scores in a football game are independent. The answer to this question is not entirely obvious. On the one hand, knowing that one team scored 7 points doesn't tell you anything a priori about the second team's score. On the other hand, one team's score during a game will certainly influence the strategy of the opposing team: if one team is ahead by a wide margin, for example, the losing team will likely play riskier in the hopes of making some big plays. Conversely, if the difference in scores is very close, teams are less likely to make plays that are as risky unless it's late in the fourth quarter.

Alternatively, what if you are told that one team scored 7 points, but that the game went into overtime? Now you know a great deal about the other team's score: since overtime in the NFL is sudden death, and since the only way to score 7 points is by a touchdown or the (very unlikely) combination of a field goal and two safeties, you know that the other team must have scored 4, 5, 7, 9, 10, or 13 points.

From these examples, it seems that football scores aren't entirely independent - there is often some relationship between the two. However, it's natural to think that perhaps on average, we do have independence. Similarly, we may hope that by looking at several games, we have independence of the second digit or the digital root between home and away teams.

Unfortunately, it seems that this is necessary work. By looking at data from 4,642 preseason and regular season games from 1994-2008 (the 1994 season was the first in which the two-point conversion was instituted), I tallied the counts for each winning square in the case of both the traditional football pool and the digital root pool. Here is the data: 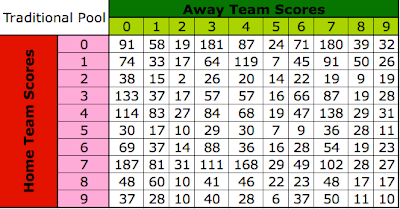 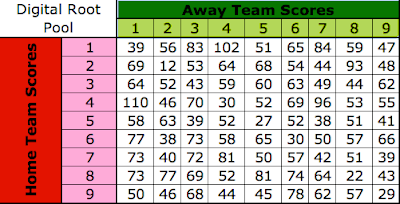 Recall that for the digital root pool, the digit 0 only occurs if one team doesn't score - to even things out, I have assigned a score of 0 with a digital root of 9 (I discussed reasons for this in my earlier post).

This heuristic is certainly reasonable, but does it hold when looking over a large number of games? I'll return to this question in a later post.