Comic (but not Comical) Mathematics

A few months ago, my girlfriend and I were persuaded to subscribe to the LA Times by a very nice man at a nearby Ralph's store who offered us $20 in groceries for the exchange. "Just try it out," he insisted, "because you can always cancel and we'll simply pro-rate the cost based on how long you were a subscriber."

Fantastic, we thought. Given the current uncertainty surrounding the future of the newspaper industry, subscribing made us feel like responsible citizens - like giving blood, but with fewer personal questions beforehand.

Unfortunately, once the newspaper began to arrive, we had to face the fact that we never read it. I think I skimmed through it a couple days that first week, but after that the papers would go from our doorstep to the recycling bin. Try as we might, we simply couldn't fit a morning newspaper routine into our lifestyle. And so, with a heavy heart, we canceled our subscription.

To be honest, I haven't really noticed a difference. All the news I need I can easily access on the internet. The only part I do sometimes miss is rifling through the comics. Sure, you can always go to a website like comics.com and see what your favorite syndicated cartoon characters are up to, but I still prefer the layout a newspaper provides, with dozens of comics squeezed together, allowing you to read them all rapid-fire without having to wade through a list of comics and be bothered by loading times.

My father remedies this by e-mailing me comics directly. Every day I know that I can look forward to the latest adventures of Liō, but this daily standard is sometimes intermingled with other comics. For example, just the other day my father sent me the following math-themed comic: 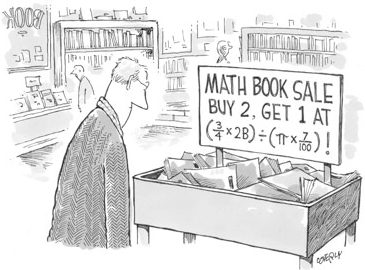 This is the work of a man named Dave Coverly, who apparently has been named Cartoonist of the Year by the National Cartoonists Society. More of his work can be found here. Some of his cartoons are quite good. Unfortunately, the one above is not.

The above cartoon has the potential to work on multiple levels, but fails to do so. Certainly anyone can read the comic and get the joke (ha ha, the description on the sign involves math, it's funny because the books in the bin are math books!), but the sentence on the sign doesn't make any sense. Forget that the mathematical expression is complicated - replace it by a number, such as 1.8. Then the sign reads "Math Book Sale: Buy 2, Get 1 at 1.8!"

Huh? What is this supposed to mean? If Coverly had written 1.8 instead of (3/4 x 2B) ÷ (7π/100), I would hope that an editor would've said something like "Hey man, that doesn't make any sense, why not try for a joke that isn't so sloppy?" Instead, we get basically the same punchline, but masked by a more convoluted expression. No doubt the reader is meant to simply see that the sign involves math, chuckle inwardly, and turn the page.

It may sound like I'm just trying to pick a fight, but I don't think this kind of thing would fly with another subject. For example, suppose the comic had a Spanish theme rather than a Math theme. In such a case, Coverly's comic might look something like this: 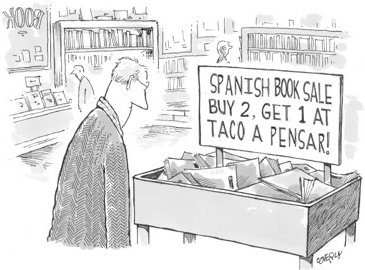 This cartoon, like the last one, works on one level: it's a Spanish book sale, and the sign describes the sale with some Spanish. It's not hard to get the joke.

However, anyone with a basic understanding of Spanish would probably find this comic more confusing than funny, because the Spanish phrase doesn't make sense. The phrase certainly doesn't explain the sale, but it's also not particularly funny in it's own right. Why wouldn't the sign say "half price" in Spanish? Alternatively, one could write a joke in Spanish - this would be lost on people who don't speak Spanish, but they would still be able to appreciate the basic joke, namely that the Spanish book sale sign is partially written in Spanish.

The situation with math should be no different than the situation with Spanish, but apparently a comic like this is allowed to slide by. Perhaps our population's mathematical illiteracy is worse than our Spanish illiteracy. Even so, I think it's fair to call out this comic for simply being lazy. It's not hard to get the same joke across, but enhance it so that the sign actually makes sense. Here is just one way Coverly could've enriched his original idea: 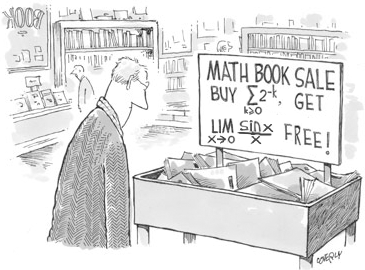 Of course, one could argue that Parade Magazine is not the place one should go for a daily dose of mathematical humor. And indeed, you'd be correct. Of the nationally syndicated strips, Foxtrot is the only one that consistently uses math for a punchline, but such examples are few and far between. As always, for math themed comics, one is best advised to search here.