Math in the Movies: District 9 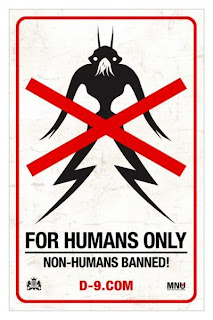 In continuing with the theme of discussing movies before I see them, I'd like to say a few words about the upcoming film District 9. You can see the trailer below, if you haven't heard of it (although if you live in LA it's difficult to plead ignorance, since the viral marketing has been on full blast all summer).

It's natural to ask what a film about aliens living in South African refugee camps has to do with mathematics. Aside from the obvious (no doubt any intergalactic species must have a good working knowledge of mathematics), I'd like to point you to an aspect of the marketing campaign for the film that's featured on the official website. If you look in the lower right, you will see a link to a site that immediately aroused my interest: Maths From Outer Space.

The purpose of this website is best summarized in its own words:

Maths From Outer Space wants to redefine what it means to be human! Our scientists have found a way to enhance the spatial and logic capabilities of the human body... In other words, we've found a way to make you smarter! Would you like to see if you are qualified to take part in this exciting endeavor?

From here, you can click through to take a math test. This is remarkable for a few reasons. First of all, the fact that a film like this would even incorporate a math test as part of its marketing strategy is pretty interesting. But not only that, by the end of the quiz the difficulty level of the questions went far beyond my expectations. This is a summer movie about aliens, after all, and yet their math quiz ends with questions like this: 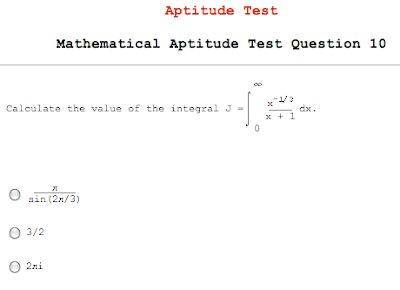 Nothing in the quiz goes beyond the level of calculus, but even this level of sophistication is fairly surprising. After all, not even films with subject matter that focuses on mathematics give math quizzes, let alone math quizzes involving calculus.

Unfortunately, it's not perfect. First of all, there are some mistakes in the quiz - what is one to do when none of the options given is correct? 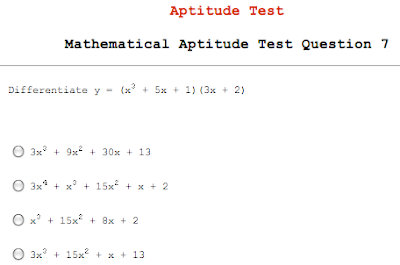 The "correct" answer is the first one. Perhaps if aliens had mastered the concept of the derivative, they wouldn't have gotten trapped in the slums of Johannesburg.

Even worse is the fact that even if you answer all the questions correctly, there is no payoff. When you click to learn more about the "enrollment details," you're sent to a bogus link. How disappointing for the student who dreams of one day applying his math skills to uncover the secrets of advanced alien technologies.

Overall, though, I must give kudos to District 9 for its proactive stance on the integration of mathematics and film (then again, coming from a distributor called QED International, is it really a surprise?). If only more summer blockbusters would follow this lead. Perhaps other studios will take note, and next year will feature an even more seamless integration between pop entertainment and post-secondary school mathematics. 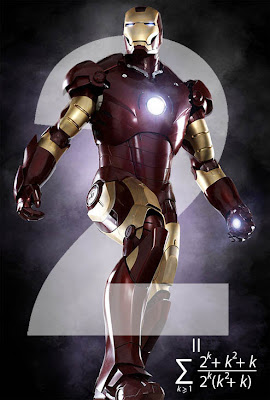 The future of summer entertainment? One can only hope so.