Math in the Movies: Up

As many of you are no doubt aware, Pixar's latest film opens this weekend. I have yet to see the film, so I'm sure I am spoiling nothing by telling you that part of the film involves an old man flying through the sky by means of balloons that are attached to his house. 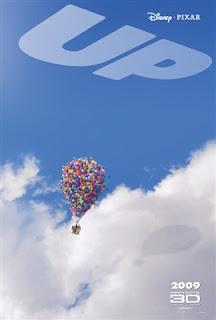 Do not try this with your home.

Given that I have yet to see the film, you may wonder how I could possibly hope to connect it to mathematics. Thankfully, I don't have to - the work has been done for me by Alexis Madrigal over at Wired.com, who wrote an article discussing the feasibility of using balloons to take to the skies in one's own home.

His assumptions are that the house weighs roughly 100,000 pounds, and that the balloons are spherically shaped with a diameter of three feet, which may seem large at first, but seems more reasonable if you look at other shots of the floating house. How many balloons does that look like to you?

Based on these assumptions, and the weights of air and helium, Mr. Madrigal estimated that it would take roughly 105,854 balloons to lift the house.

The fun really begins in the comments section, however. The model presented in the article was quite simple and easy to understand, but perhaps overlooked some of the subtleties in the problem. Here are my favorites:

You forgot to factor in the weight of the string for the balloons. The balloons at the outer edge of the cluster would need longer strings = less overall buoyant lift/balloon once you factor the extra string weight. So you’d need more, or larger balloons.

Then there's this one:

Actually, there’s a math error. The density of helium will be greater when in a balloon as the pressure in the balloon is greater than atmospheric pressure. This means that the lifting force per balloon is less and that you’ll need even more.

Of course, there's also the question of how the house broke free of its foundations. The trailer makes it look as though the balloons themselves were able to uproot the house - if this is the case, one would need significantly more balloons in order to rip the house up from the ground.

Perhaps this is why the in-house estimate from Pixar for the number of balloons that would be required to make the house fly is nearly 250 times larger than the estimate given by Mr. Madgrigal. Believe it or not, the feasibility of lifting a house with balloons was brought up at Cannes, where the film premiered, to which co-director Pete Docter replied:

We have scientists at Pixar, and one of the first questions we asked them was how many balloons it would actually take to float a house. They calculated it would take 26.5m balloons. So we reckoned we would be safe from people trying it themselves.

Whether you think the number of balloons required is in the tens of millions, or just a measly 100,000 or so, both numbers are significantly more than the amount of balloons pictured on screen - which, according to a recent article by Daniel Terdiman at CNET, is closer to 10,000. This article is also good for those of you who may not be impressed with the simple calculations involved in trying to determine how many balloons would be required to lift a certain amount of weight.

Instead of analyzing the plausibility of using balloons to lift a house, the CNET article discusses the real world difficulty that comes with trying to animate upwards of 10,000 balloons so that they move together in a realistic way. The dynamics of the balloons are all highly connected - the motion of one balloon will have an effect on all the others - and modeling a system with that level of complexity is certainly no easy task. This is where mathematics flexes its muscles a bit more.

According to the article, the machinery at Pixar was initially only able to handle animation for about 500 balloons - to ramp this number up twenty-fold certainly must have taken some hard work and some mathematical wizardy. Producer Jonas River sums it up best:

The audience looks at (the balloon cluster) and says, "Oh, that's pretty." But they have no idea how much work went into it. We worked on that for over a year. (Then) the kid takes off his hat and runs his fingers through his hair. My mother will never know that took 15 people six weeks.

So, whether you're in it to get ideas for how to build your own flying balloon contraption, or because you're curious to see how Pixar is again pushing the boundaries of what is possible in animation, there will be something to satisfy your mathematical curiosity. The movie currently holds an impressive 98% freshness rating on Rotten Tomatoes. How much of this high rating can be explained by the film's mathematical sophistication? Probably very little - but at least a man can hope.