A Variant of the Traditional Football Pool

Update: Part two of this three-part series on football betting pools can be found here.  Part three is here.

During this month's Super Bowl, like many of my fellow Americans, I participated in the great tradition of the football pool. This method of betting on a football game is quite simple. For those of you who have never partaken in this activity, here's how it works:

A possible football pool grid, with the winning squares from the above example in green.

This gives rise to a natural question: on average, are the last digits in a football score distributed evenly between 0 and 9? If not, is there a different way we could conduct the pool that would yield more uniform results?

Of course, there is excitement in the fact that once the numbers have been revealed, some squares will be more popular than others. If you have the 0-7 square or the 7-0 square, suddenly your odds of winning will have jumped up, whereas if you're stuck with the 2-2 square, your chances are practically nil. (In fact, Doug Drinen crunched some numbers back in 2005 by looking at the scores for all football games since 1994, and found that the chance of winning the fourth quarter with a 7-0/0-7 square was about 3.8%, versus a dismal 0.04% for the 2-2 square.) This disparity between squares, however, means that the unlucky people who get the squares less traveled will have less of a stake in the game, and perhaps enjoy it less because of this. 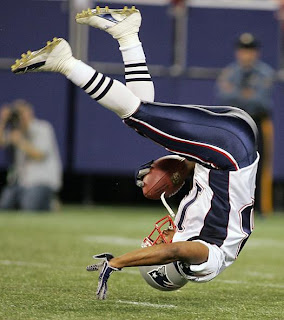 Is he playing football, or just really excited about math?

Here's one simple alternative to the traditional pool described above: instead of looking at the last digit of the score when determining the winning square, what happens if you look at the sum of the digits? With this system, a score of 14 would have the sum of its digits equal to 1 + 4 = 5. So, for example, if the final score was 14-21, this would correspond to the box at 5-3, rather than the box at 4-1.

There is one slight hiccup when using the digital root: namely, the digital root of a number is 0 if and only if that number is itself 0. This means that any box associated to a 0 on the row or column will only be a potential winning candidate if one team remains scoreless.

One way to overcome this slight complication is to simply ignore the digit 0, and make a 9 x 9 grid with digits from 1 to 9. Most of the time, this will be fine, especially later in the game when it is unlikely a team will have no points. In the event that you do encounter a 0, I'll explain two possible solutions below.

Why might we expect the digital root to give us a more uniform distribution of values than simply looking at the last digit of the score? Well, think about the way football is scored. In the game, a touchdown and a field goal will (usually) result in a 10-point increase to the score. So, for example, if the score is 10-7, and the winning team scores a touchdown and a field goal, the score will likely be 20-7 - this is nice for the winning team, but not so interesting for those in the pool, since this has no effect on which square is winning (in either case, the winner is 0-7).

This is but one example, but it is useful in guiding our intuition. Is this indicative of a larger trend? This may suggest that using the digital root gives a more uniform distribution among digits, but is this really the case? 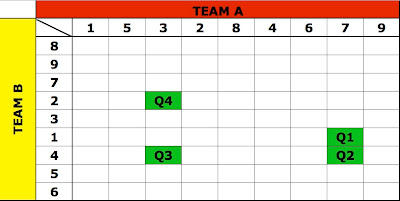 The grid and winning squares for the first example, using the digital root.

To answer these questions, we can turn to our trusty friend, mathematics. The Football Database provided me with the final scores for every football game during the 2008 season (including preseason), and this is the data I have used as the basis for the following results. Note that because I only used scores from the end of the game, everything here applies only to the final winning square. Also, there's no doubt that I could get more accurate data by compiling data over many seasons, but I don't really have time for that, and one season gives enough data to paint an interesting, if not entirely complete, picture.

Here are the questions the data addresses:

What can we learn from this table? Well, it's clear from the second column that the last digit of football scores certainly don't seem to be evenly distributed. Some digits, such as 7 and 4, have much larger counts than numbers like 2 or 5.

What about for the digital root? In this case, the numbers appear to be much more evenly distributed, with the exception of 0, but this is to be expected. Aside from 0, the digit which appears to deviate the most is 9, with only 63 final scores having this digit as their digital root.

If you're one for pictures instead of words, this graph can help to visualize the discrepancy between these two methods. Here I've divided the counts above by 664 to yield percentages in the graph: 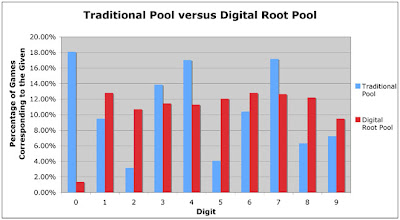 This is all well and good, but what if 2008 was just a strange year for football scores? To eliminate all doubt, I tested the probabilities for the traditional pool against the null hypothesis that all the probabilities should be equal (i.e. the probability that a score should end in a certain digit is 10%, regardless of the digit). The result? The odds of getting such uneven percentages if the last digits of the scores truly are evenly distributed is essentially 0%1. From this, we can safely reject the null hypothesis and conclude that looking at the last digits of football scores will not give you numbers that are evenly distributed among the digits from 0 through 9.

How about with the digital root method? To answer this question, we need to know how to deal with that pesky 0 digit, which clearly skews the data. Here were the results under two different sets of rules governing what to do with 0.

In the first case, I simply ignored the scores that were 0. This amounted to only 9 scores, so I was still left with a sample of 655 scores. To these scores I conducted the same analysis as I did with the traditional pool, but in this case the null hypothesis increases each digit's probability from 10% to 11.1%, since there are only 9 digits to consider rather than 10. Here, the odds of getting the percentages above if the digital root of the end game football scores are evenly distributed are about 34%2. In other words, we can't reject the null hypothesis in this case - it may be that the digital roots lead to an even distribution between the digits from 1-9.

Alternatively, you could simply distribute the zeros randomly between the remaining digits - but this should give a probability that is roughly the same as in the first case. 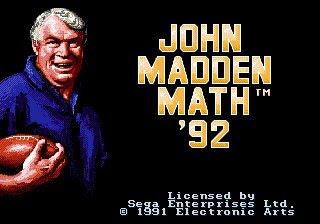 While he may be best known for his football games, who could forget the classic "John Madden Math '92,"
which became an instant classic for both the Super Nintendo and Sega Genesis?

Here are some further questions. I won't address them here, but may tackle them later.

I can't say yet whether I prefer the digital root method to the traditional pool, but it certainly seems to offer a compelling alternative. In conclusion, here is a video of the 49ers from the 1980s rapping about how awesome they are. If only the 49ers of the 21st century could flow as well as these dudes, maybe they would have a shot at returning to glory.

Big ups to Jon over at Food Junta for alerting me to this inspiring piece of NFL history.

1. Using a simple Pearson's χ2 test, one obtains here that χ2 is approximately 188.7. We have 9 degrees of freedom, so this gives the result (probabilities can be calculated in many places online, e.g. here).

2. In this case, we get χ2 is approximately 9.05. Since we ignore zero, this reduced our degrees of freedom to 8.