Math in the News: Is U.S. Culture Crushing Potential Mathletes?

Earlier this month, the New York Times ran an article about the dearth of U.S. students with strong skills in mathematics. While this is not quite a revelation, it is made more timely by the recent release of a study that looked at data from Putnam exams, International Mathematical Olympiads, and data from other programs meant to nurture younger students in mathematics.

This type of data is more powerful than looking at SAT scores, for instance, because exams administered in a mathematics competition are notoriously difficult. There are thousands of students who will score an 800 on the math section of the SAT, and so this test offers no way to distinguish between them. Looking at this other data, however, allows us to gain a much deeper insight into the abilities of students in the U.S. with an aptitude for mathematics.

The second conclusion, which is somewhat broader, is that a majority of students in the US who excel in these exams are either foreign (for example, the Putnam exam can be taken by any undergraduate in the US or Canada, not just citizens), or are children of immigrant parents.

The combination of these two points is highlighted in the breakdown by country of the women who compete in these types of competitions. The article informs us that, regarding the makeup of the teams sent to the International Mathematics Olympiads,

All members of the United States team were boys until 1998, when 16-year-old Melanie Wood, a cheerleader, student newspaper editor and math whiz from a private school in Indianapolis, made the team. She won a silver medal, missing the gold by a single point. Since then, two female high school students, Alison Miller, from upstate New York, and Sherry Gong, whose parents emigrated to the United States from China, have made the United States team (they both won gold).

By comparison, relatively small Bulgaria has sent 21 girls to the competition since 1959 (six since 1988), according to the study, and since 1974 the highly ranked Bulgarian, East German/German and Soviet Union/Russian IMO teams have included 9, 10 and 13 girls respectively.

The data is troubling because not only does it show that Americans are getting trounced on the international stage, but it shows that when we do excel, it's often because of imported values from the countries that are trouncing us in the first place.

This leads to an important question: Is American culture to blame? Why do our students simply not perform as well?

Indeed, most people interviewed seem to think that culture is, if not the primary cause, certainly a guilty party. Simply put, mathematics is held in a much higher regard in other countries. Consider this explanation of the perception of mathematics in China:

Dr. Feng says that in China math is regarded as an essential skill that everyone should try to develop at some level. Parents in China, he said, view math as parents in the United States do baseball, hockey and soccer.

“Here everybody plays baseball,” Dr. Feng said. “Everybody throws a few balls, regardless of whether you’re good at it, or not. If you don’t play well, it’s O.K. Everybody gives you a few claps. But people don’t treat math that way.”

If we want to tackle this problem, looking for solutions from the cultural side shouldn't hurt. There are many negative perceptions that keep math out of the cultural consciousness, not least of which is the idea that somehow mathematics is meant to be tedious, difficult to understand, and without application. If other countries can highly value mathematics, see the use for it, and believe that anyone can achieve a certain level of mathematical sophistication with due diligence, surely America can as well.

Of course, getting our culture to that point will require serious work. However, certainly there must be some baby steps that will help us along the way. With that in mind, here are some suggestions that may help bring U.S. culture and mathematics into a more harmonious relationship.

1. Get a mathematician on the Wheaties box.

The analogy between math and sport is certainly a rich one. Both require hard work and discipline in order to excel. Both should be included in any child's education. And both attract people to their summer camps.

At the same time, there is quite a wide cultural divide that is perceived between these two groups. Athletes are put on pedestals (literal and metaphorical), and their toned physiques are heralded as the pinnacle of human achievement. They are also widely regarded for their dedication, their determination, and nobody questions their hygiene. Sadly, the same cannot be said for mathematicians.

To combat this inequality, why shouldn't it be the case that top performers from both fields should be able to have their face on a Wheaties box? Certainly breakfast is the most important meal of the day for both athletes and mathletes - we should emphasize this point by highlighting the achievements of mathematicians on the orange box we all know and love. 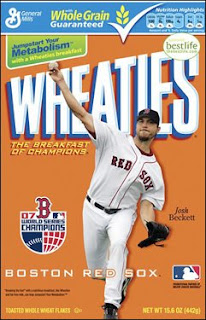 That's a nice throwing arm you've got there, Josh Beckett.
But how's your multivariable calculus?

2. Put a mathematician on The Simpsons.

Sure, The Simpsons doesn't hold quite the cultural sway that it used to, but its longevity shows that it has carved out an enduring place for itself in our culture. It is still quite popular, and has its share of devotees, and for this reason many people still pay attention to what it has to say, even if it may have been eclipsed by other series (animated or otherwise) in recent years. In this respect, it is a bit like the Hillary Clinton of prime time television.

Therefore, it stands to reason that having a mathematician lend their voice to an episode of The Simpsons, if handled in the right way, certainly couldn't hurt to flip the cultural perception of mathematics on its head. The Simpsons has featured hundreds of guest stars: celebrities, heads of state, authors, athletes ... the list goes on. Moreover, a move to bring in a mathematician would not be entirely unprecedented - Stephen Hawking has made not one, but two guest appearances on the show, and although he is a physicist rather than a mathematician, it would not be such a huge leap to move from a guest star of the former occupation to a guest star of the latter.

Of course, we could give the show the benefit of the doubt, and assume that despite their best efforts, producers have been unable to find mathematicians who would be willing or able to participate. Should this be the case, I am willing to humbly submit myself for such duties. I believe I am able to shoulder the tremendous responsibility that such an opportunity would entail.

Stephen Hawking: Bringing theoretical physics
to the forefront of pop culture since 1999.

How do athletes and celebrities become cultural icons? Certainly their abilities take them far, but would Tiger Woods be as well known without his lucrative contract with Nike? Would Michael Jordan have been as successful without his deals with McDonalds, Coca-Cola, Hanes, and most importantly, Ball Park Franks? Would Gary Coleman be where he is today without Cash Call? I think not.

Given all of this success, there's no reason why academics shouldn't be able to dip into the same pot. You just got tenure at a major university? Well congratulations, here's a contract with Gatorade. Solve the twin prime conjecture? Then you get to sport the 2009 Saturn Astra!

Of course, it's a slippery slope to begin mixing economic incentives with academic achievements. But it certainly would help propel academics, and mathematicians in particular, into the spotlight.

Ok, so I'm (mostly) kidding about the above suggestions. But this disparity between our cultural views of mathematics compared to the views of other countries really is troubling, especially as we look towards a future that demands more and more technical sophistication from its populace. Bringing mathematics out of the cultural doghouse requires more transparency on our part, so that people can see why mathematics is important, and it also requires a better educational foundation, so that students see math as something beautiful and widely applicable, rather than some draconian set of rules, the knowledge of which was rendered obsolete with the creation of the calculator.

With the right resources, we can turn this perception around. Until then, be on the lookout for any chance to defy the stereotype that math isn't worth knowing. Every little bit helps, and every little bit will be needed.

As a footnote, those of you who read the NYT article will notice that it mentions a particularly hard problem from the 1996 IMO exam. So difficult was this question that only 6 students out of a pool of hundreds were able to completely answer it. If you're looking for a good way to spend an afternoon, here is the problem in question (if nothing else, you can learn a new word by reading it):

Let RA, RC and RE denote the circumradii of triangles FAB, BCD and DEF respectively.

Let p denote the perimeter of the hexagon. Prove that