Update (October 2009): I've written a follow-up article with more math themed costume ideas. With Halloween but a few short days away, many of you with a love for both dress-up and mathematics are probably thinking hard about what you should be this year. I thought it would be fun to find some good math inspired Halloween costumes using the transformative power of the internet, but unfortunately there really wasn't much to get excited about. After spending some time scouring, the only costume ideas that were even tangentially related to math that I could find were the following: 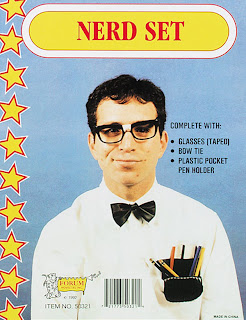 By far the most offensive of these costume choices. Of course, this offers a broader stereotype than that of the mathematician, but the mathematician and the nerd trade at about the same cultural currency value.

What's most disappointing is the fact that this isn't even a top quality impersonation of your stereotypical nerd. Anyone thorough enough to make use of the pocket protector would almost certainly keep their pens looking tidier than this guy does.

I guess if you want to reinforce 1980s stereotypes about smart people this is the costume for you. However, I feel like this is right on the border of even being considered a costume. If someone feels so lackadaisical about dressing up, I think it would be more likely for them to simply not do anything. 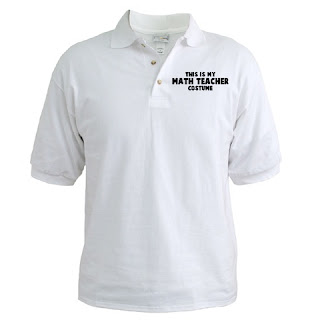 This one is also fairly uninspired, although it certainly does have simplicity and transparency going for it.

In this case, the real irony is that math teachers do not wear shirts proclaiming that they are math teachers, so anyone who wears this shirt must paradoxically not be dressed in a math teacher costume.

Really, a more convincing math teacher costume would just be a normal, everyday outfit. But in this age of Halloween spectacle, we all know that such a costume simply won't cut the mustard.

This is the best costume I could find, although its link to mathematics is more tenuous than I would prefer. Taken from Discover's Top Ten Science Halloween Costumes, the Rubik's Cube Head certainly could lead to a conversation about mathematics, although I find this unlikely.

What's more likely is that people will ask you things like, "How can you see out of your giant cube head?" The more rambunctuous may pin you down and try to see if the cube is actually functional. For a select few, however, the discussion may turn towards mathematics of the Rubik's Cube, and at the very least, you should score some points for originality.

Sadly, in general the top ten science costumes from the blog skew heavily towards the science side, and away from the math side. The only other costume from the list that shares a close connection with mathematics is number 3, the Cat-ahedron, which, though charming, I have omitted since to the best of my knowledge, none of my readers are cats.

It is clear that the costume ideas available on the Internet are limited. For those of you wishing to combine math and Halloween, I wish you the best of luck. Do any of you know of costumes that have succesfully synergized the two?