Math in the Movies: Good Will Hunting

Winning them the Oscar for Best Original Screenplay in 1998, Good Will Hunting propelled Matt Damon and Ben Affleck to the Hollywood A-list (no doubt Phantoms would have done this for Ben Affleck, had it not been for the success of Good Will Hunting only months earlier). I will not summarize the plot, except to say that in this film, Matt Damon is a math superstar. For those wanting more in the way of plot summary, this trailer may help to refresh your memory:

There are a number of films that center around math geniuses, and for the most part they have met with some degree of critical and commercial success. Our purpose here is not to critique these films, but to answer a simple question: In what ways do these films perpetuate stereotypes about mathematics and mathematicians, and in what ways do these films rise above those same stereotypes? Here we use a rather crude scoring system, whereby each perpetuated stereotype corresponds to a loss of one point, while each stereotype that is overturned corresponds to a gain of one point.

Let's start with the good.

Will Hunting certainly runs counter to this statement. He has several close friends, enjoys going out for drinks, and lands a smoking British girlfriend. Will also really likes punching people, a pastime I think it's safe to say is not shared by most people who study math.

While Will Hunting is not socially awkward, not everyone in the film can escape the same fate. Fields medal winning, ascot adoring math professor Gerald Lambeau seems relatively well adjusted, but his teaching assistant Tom is painfully awkward - almost awkward enough to overshadow the non-awkwardness of the rest of the mathematically inclined cast. Perhaps he simply got lost in Matt Damon's eyes.

Overall, the film does a good job of showing that not everyone who is good at math is a social outcast. +1.

- Mathematicians are single-minded of purpose, and have no interest in anything besides mathematics.

Will Hunting provides a strong counter-example for this assertion as well. The movie shows us that Will is not just a math prodigy, but is basically an all-around smart dude. Very little time is spent showing the audience how Will does math - understandably so, since I can imagine few things less cinematic than watching someone think about math problems. Because of this, we see the other aspects of his character, and learn that his realm of interests extends far beyond what can be found in a collection of math books. +1. 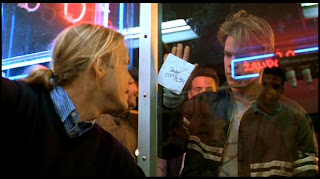 Among other activities, Will enjoys schooling Harvard punks.
He also enjoys eating caramels.

While he certainly has some issues, I don't think anyone would assert that Will has any significant mental disorders. This film shows that you don't have to be crazy to enjoy math - although it couldn't hurt, I suppose. +1.

What about the not so good?

- It is important to do math on windows, mirrors, or other unconventional writing surfaces.

I get it. Watching people sit at a desk and write things down is boring. Nobody wants to watch that. But if you go to a mathematician's office, I doubt you will find writing on the window, or on the mirror of their bathroom at home. That's what blackboards are for. -1. 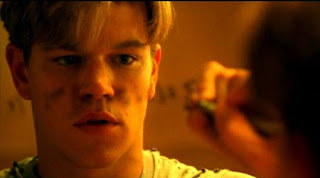 Dude must've run out of chalk.

Other than that, the film does a fairly good job. It is understandable vague when it comes to the supposedly insanely difficult problems Prof. Lambeau gives his students throughout the film, although the brevity of their solutions seems to suggest that really they weren't so bad in the first place. The film does earn points, however, for featuring Parseval's identity in the first classroom scene.

In conclusion, the film earns two points here, for its portrayal of math students as real people with varied interests, even if they do enjoy writing equations on non standard surfaces. One wonders if the sequel will be able to compete.