You knew it had to be coming. Any self-respecting individual interested in the intersection of math with popular culture must, at some point, discuss the canonical element of said intersection: CBS's own crime solving math show, Numb3rs. The use of the 3 is to eliminate any ambiguity surrounding the subject matter of a show called "Numbers."

Since premiering in January of 2005, Numb3rs has been a consistent performer for CBS, in spite of (or because of, depending on your assumptions about the makeup of the show's audience) its Friday night time slot. For those of you who may have never seen the show, the following synopsis should help give you some perspective:

Body counts, multiple criminal masterminds, and perpetrators who are likely to act again ... this is the world of NUMB3RS. FBI agent Don Eppes (Rob Morrow) couldn't be more different from his younger brother, Charlie (David Krumholtz), a brilliant math professor at a California university. Don deals in hard facts and evidence, whereas Charlie thrives in a world of mathematical probability and equations. But despite their disparate lives and career paths, Don and Charlie often combine their areas of expertise to solve a wide range of challenging crimes in Los Angeles. (Courtesy of the Numb3rs Season 2 DVD Box)

Indeed, mathematicians would be nowhere without their probabilities, or their equations. Startlingly, one could replace the word "equations" by the word "witchcraft" without at all effecting the tone of the above synopsis.

Let's take a look at the man who provides the center for the show, Professor Charlie Eppes. 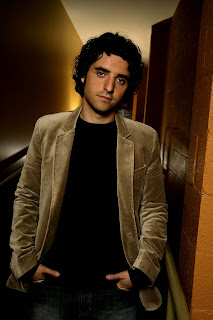 When you're this good at math, you get
to wear blazers made entirely of gold.

Watch a few episodes of Numb3rs (or read this Wikipedia entry), and you will likely learn the following about this darling mathematician:

What are we to make of these observations? While some play in to stereotypes of mathematicians, others fly in the face of those very same stereotypes.

For the record, let it be known that you don't have to graduate from college when you're 16 to be a good mathematician (although it certainly doesn't hurt). Moreover, not all mathematicians are good at, or even enjoy chess. 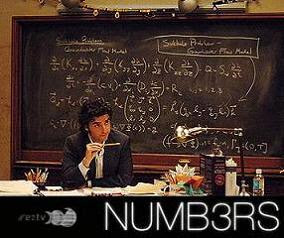 By and large, though, we do enjoy a good blackboard.

Of course, when you are centering your show on a mathematician, you had better make that mathematician marketable. So in a sense, avoiding certain stereotypes becomes a necessity. Still, having a positive mathematics role model like Charlie Eppes certainly can't be bad for the math community. In fact, if the below video is any indication, people LOVE mathematicians.


Turn up the volume and press play.
You won't be disappointed.

This is not to say that Charlie is the only character who displays certain stereotypical idiosyncrasies. In fact, Charlie's friend and colleague Larry Fleinhardt exhibits behaviors stereotypical of mathematics savants, including a certain social awkwardness, as well as an aversion to any food that is not white. However, since Professor Fleinhardt is technically a Physicist, I will throw him to the Physics camp for interpretation.

Mathematicians may be portrayed relatively favorably, but what about the math itself? Is it legit? Well, it's hard to say, really, since when all is said and done, there's not a whole lot of math on display. Certainly there are a lot of scenes with people waving their hands and discussing math, or scenes with chalkboards that have math on them, but these scenes are often placeholders in between scenes with guns or explosions or good looking government employees (here I use "or" in the inclusive, mathematical sense of the word). This, however, is expected, again because of the mass market nature of the program. Overall, I think you'd find it difficult to do math any better after having watched an episode of Numb3rs. On the plus side, they do emphasize that the story lines are based on actual cases, so viewers can take comfort in the fact that even out in the real world, math is helping to bring in the bad guys.

The show certainly doesn't do any damage to math's reputation. By making a protagonist who is smart and has a winning smile, the creators seem to be doing their part to show that math needn't be as scary as it's made out to be. While there are plenty of moments where it can be hard to suspend your disbelief (he may be smart, but I don't think even Doogie Howser can solve the Riemann Hypothesis, contrary to what Prime Suspect would have us believe), as an overall ambassador to the universe of mathematics, the show gets a pass. If nothing else, it teaches America that not all mathematicians are completely socially inept, even if we do live at home and put the moves on a few of our advisees.