A well designed t-shirt has the power to delight and inspire; it can break the ice at the start of the evening, and seal the deal at the end. It can be a powerful tool for social interaction, and can help forge the bonds that will last a lifetime.

It is with this in mind that I bemoan the present state of mathematically themed t-shirts, many of which are asinine to the point of nausea. I also feel the need to speak out and warn those who would consider buying such t-shirts for friends or loved ones, under the misguided impression that anyone who studies math will appreciate (much less wear) a t-shirt just because it is related to math.

Let's analyze some examples, to see just what's gone wrong with the current state of mathematically inspired fashion. The following five designs can be found here, along with a multitude of others. However, every design seems to fall into one of the categories below: 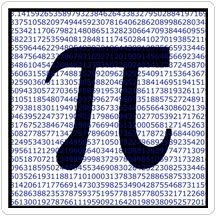 1) The Symbol Design (epitomized by the pi design):

Many t-shirt designs seem to be of the philosophy that by throwing a bunch of math symbols on a white background, somehow their shirt is clever or interesting. In particular, there are a plethora of t-shirts focused on pi, its decimal approximation, or some pun involving pumpkins or actual pies. Pi seems to have become the poster child for mathematics, which I guess is ok, but I think you will be hard pressed to find a single mathematician who will find the transcription of a long decimal expansion of pi interesting. And for those mathematicians who already feel isolated from society, I don't think wearing a t-shirt with a whole bunch of numbers on it will make them feel better.

I wouldn't have as much resentment towards this particular letter if it weren't for the fact that it always seems to be hogging the spotlight. How about a little love for e? Is it too much to ask for some love on behalf of the Euler constant? Although such similarly themed shirts would be just as unappealing, at least we would have some more variety. Perhaps it has something to do with the fact that other constants don't lend themselves as easily to puns involving baked goods. 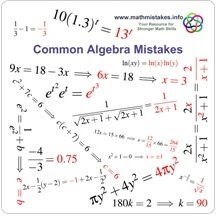 Let's be honest: nobody is going to be impressed if you have a t-shirt with a whole lot of formulas on it. In fact, some people might be downright scared of such a shirt. And in a case like the one pictured here, why would one want a list of algebra mistakes on a t-shirt? This hardly seems like the most effective place to keep a list of common mistakes. Wouldn't a notebook be more preferable? Not to mention the fact that while wearing the t-shirt, it would be difficult for one to read these examples; the fact that there seems to be no attempt at formatting them only compounds the matter. Such examples often make poor use of the t-shirt medium, and would seem to fit much better elsewhere. 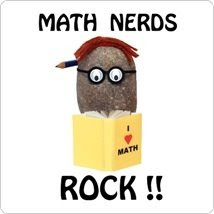 3) The Plain Old Not Funny Design:

Come on now. Is this really the best we can do? Not only does this design juxtapose two horribly uninspired slogans, but the pun is terrible. If we're going to go that route, shouldn't the shirt say "Math nerd rocks rock!!"? And how can a rock hold a pencil behind its head with no ears? 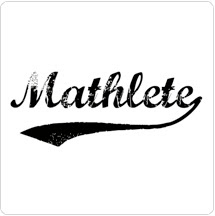 Sometimes these designs can rise above mediocrity, but I don't see how they could inspire one to make a purchase. I do appreciate the simplicity of the design pictured here - in fact, of the five displayed here, I would consider this particular design my favorite. It does not smack of effort as do so many other designs, but at the same time, it is this very same feature that keeps this type of design from rising above its brethren.

I would, however, highly recommend the thong version of this item, if you are looking for a gift for that someone special. 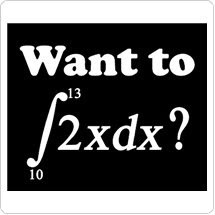 Designing a t-shirt based on mathematics can be difficult: on the one hand, you want to make a joke that people who study math will find amusing, but the shirt should also be decipherable to people who do not do math. Otherwise, why should anyone wear such a shirt in public? Presumably, one wears funny t-shirts to project the impression to others that one has a keen sense of humor. But if many people don't understand your shirt, what then?

This shirt should not be undecipherable to anyone who remembers some basic calculus - unfortunately, asking that of our citizenry seems to be a bit much. On the other hand, one can be thankful that the calculation is not difficult, so that even if your calculus is rusty you should be able to dust off the cobwebs and compute the joke. However, even though this t-shirt does give one that light bulb moment when the content is understood, the punchline itself is a bit crass for general consumption. Certainly, one should hesitate before wearing this shirt to try and get a rise out of a room full of mathematicians, at least if the mathematicians are senior to the wearer.

What then, is a fashionable young mathematician to do? Is there no safe haven from uninspired, math-themed t-shirt designs? I think one will find, upon scouring the internet, that resources are indeed limited. However, there are a few rays of hope that shine brightly through the darkness. Perhaps my favorite example is given by the image below. 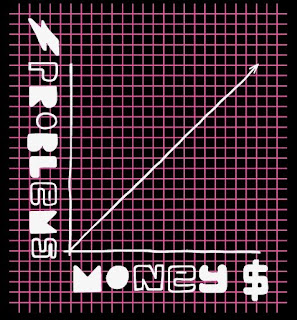 This design, from threadless.com, is one I would proudly sport on my own masculine frame. It works because it is not actually a joke about mathematics, but a joke taken from pop culture that uses math to deliver the punchline. As such, it becomes accessible to a wide audience, and shows how even rappers can benefit from mathematics. While strong arguments could be made against the plausibility of a linear model as the best fit for the relationship between money and problems, the basic idea is clear, and can be easily understood and admired by people from all walks of life.

Of course, the life of a mathematician can be fraught with disappointments, and this case is no different: the design pictured here has been sold out for such a long time, one wonders if it will ever be restocked. At the same time, one can take solace in the knowledge that somewhere, somebody is looking at this shirt and having a good laugh with mathematics.