Just as you can't judge a book by its cover, it is not always easy to determine a person's mathematical background based on his or her occupation. Sure, a burger flipper at McDonald's may not look like the next Einstein, but how can you be sure she's not just working a summer job to afford university? Conversely, just because someone is highly educated doesn't mean he knows the difference between a prime and a composite number (although I'd argue that it should).

Case in point: Supreme Court justices may or may not know the meaning of the word orthogonal. Here's a snippet from the oral arguments in the case of Briscoe v. Virginia (courtesy of blog The Volokh Conspiracy):

MR. FRIEDMAN: I think that issue is entirely orthogonal to the issue here because the Commonwealth is acknowledging -

JUSTICE SCALIA: What was that adjective? I liked that.

JUSTICE KENNEDY: I knew this case presented us a problem.

JUSTICE SCALIA: I think we should use that in the opinion.

MR. FRIEDMAN: I thought — I thought I had seen it before.

JUSTICE SCALIA: Or the dissent.

MR. FRIEDMAN: That is a bit of professorship creeping in, I suppose.

While Friedman uses "orthogonal" in a bit of a metaphorical sense, this use is far from unprecedented - indeed, this use is even documented in the venerable internet database ubrandictionary.com, which defines orthogonal as a term that is "used to describe two things that are independent of one another. One does not imply the other." Claiming that this usage is just a "bit of professorship" sounds a bit like a cop out. I wish Friedman had embraced it more completely.

In any event, the mathematical definition of orthogonal should be given in any halfway decent high school geometry course, if only as a synonym for perpendicular. The fact that Scalia and Roberts seem so unfamiliar with the concept is, at the very least, a little disappointing.

But all is not lost. On the other hand, last weekend Fox aired a special commemorating 20 years of The Simpsons, appropriately titled The Simpsons Anniversary Special: In 3-D! On Ice!. Several people contributed interviews to the special, including Mike Judge, creater of Beavis and Butthead and King of the Hill, among other comedic gems. During the interview, Judge dropped a bombshell: were it not for The Simpsons, he believes he would be a math teacher. In fact, after doing some research online, I discovered that Judge didn't begin playing with animation until the age of 26, while he was doing graduate studies in mathematics in the hopes of becoming a teacher.

Does this mean that Beavis and Butthead are smarter than Roberts and Scalia? Of course, some may cry out that this is an unfair comparison, but I think I can provide a fair answer. 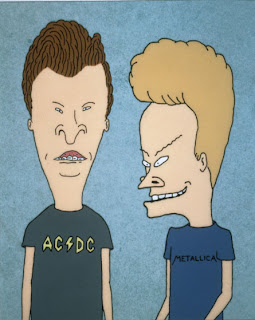