This past September, a very strange thing happened. The worlds of mathematics and comics combined to give birth to the graphic novel Logicomix, written by Apostolos Doxiadis and Christos Papadimitriou, and illustrated by Alecos Papadatos and Annie Di Donna. The book gives a slightly fictionalized account of Bertrand Russell's life, and uses this storyline as a gateway to explore the ideas in mathematical logic which were developed around the turn of the last century.

Combining mathematics and comics may sound like a recipe for disaster, but Logicomix has achieved a remarkable level of success. Not only has the critical response been exceedingly positive, but the book has also made the New York Times bestseller list. I'm assuming it was quite a popular gift item as well, because up through Christmas eve it was on back order at Amazon.com. It's certainly rare for anything so fundamentally imbued with mathematics to break into the mainstream.

Here's a video trailer for the book.

Having just finished the book, I understand why it has received so much praise. Unlike most works created for mass consumption that try to tango with mathematics, Logicomix offers a rare example of a work that is able to give some insight into what mathematics is about, and what mathematicians do, without making things too opaque for a general audience to follow along. 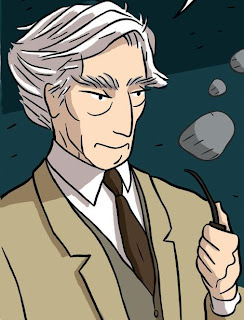 Certainly the pretty pictures help. But more than that, by placing Bertrand Russell in the pilot's seat, the reader is given a front row seat in the drama of early 20th century mathematical progress. Mathematics is given humanity: we see great thinkers struggle with fundamental problems, we see how their devotion to mathematics affects their relationships, and we see their work in a historical context as the world decays into war. Great mathematical ideas are not dissociated from their logical origins, but instead the reader sees in an organic way how a sizable chunk of mathematics from this time period was developed.

For example, a significant amount of time (some would consider too much) is spent explaining Russell's paradox. There are many approaches to explaining this paradox for a non-mathematician: Logicomix tries to do it by means of the Barber paradox, but one can think of other ways to interpret it as well. For example, I stole the following explanation from Wikipedia:

Suppose that every public library has to compile a catalog of all its books. The catalog is itself one of the library's books, but while some librarians include it in the catalog for completeness, others leave it out, as being self-evident.

Notice that problems arise because of the presence of self-reference: asking whether the catalog of all catalogs that don't list themselves should itself be listed in the catalog of all catalogs that don't list themselves is a question of whether or not that catalog should reference itself. Russell's proposed solution to the paradox involved creating a hierarchy so that such self-reference cannot be exploited. Later mathematicians offered their own solutions to this problem. Cleverly, the structure of Logicomix plays with self-reference as well, for there are many instances when the action cuts from early 20th century Europe to modern Greece, where the authors and illustrators are discussing their progress and their choices in bringing the relevant mathematics to life.

Logicomix also gives the reader some insight into Gödel's incompleteness theorem, and shows the profound impact it had on the search for a logical foundation for mathematics. Most importantly, everything is explained in a way that is easy to understand.

If you watched the video above, you may have noted that the authors admit to being interested in this material because so many of the mathematicians they discuss ended up going insane. Thankfully, the book points out that this is the exception rather than the rule, and in fact the common thread that combines the mathematicians under their consideration is that all of them studied logic, in an attempt to put the foundations of mathematics onto solid footing. While their efforts to explain this connection are full of conjecture, it is nice to see them say at the outset that lunacy is not the necessary end point for all those who study mathematics.

My biggest complaint about Logicomix (if it could be called a complaint) is that it necessarily tackles only one slice of a very large pie. Certainly the developments in mathematical logic during this time offer a rich piece of mathematical history, and laid the foundation for the development of computers in the later part of the 20th century. But there are just as many other areas of mathematical history that would also be ripe for graphic novelization. Of course, I wouldn't expect the authors to try and tackle everything in a single volume - instead, my hope would be for new volumes that use the same framework as Logicomix to tell stories about the development of other areas of mathematics. Should the authors be so inclined, I would encourage them to consider other figures to focus on for future work, so that other areas of mathematics can be illuminated. In doing so, they could bring into focus another feature of mathematics that is often misconstrued by the general public: the wide expanse of it all. This book certainly shows that mathematicians do more than multiply large numbers, but it would take several more books to show exactly how much more we do. 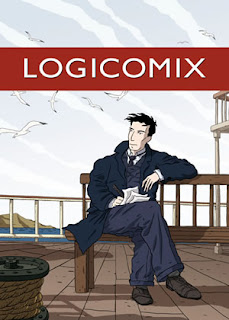 All things considered, this book is quite a success. That such a book could be created and executed so well gives me hope for the future of mathematics in popular culture. Logicomix shows that mathematical ideas don't always need to be dumbed down to be made interesting or comprehensible - with the right explanation (and maybe some pretty pictures), the audience should have no trouble rising to the occasion, and with any luck they may learn some mathematics in the process.

My apologies for not writing this up sooner, as this book would have made a great gift for the mathematician in your family. But it would also make a good gift for anyone with an interest in mathematics, at any age and with any level of experience. You may be skeptical, but I encourage you to give this book a chance. There is a lot to enjoy here.