A Lack of Math in the Movies

Apologies for my absence - academic life has recently forced me to put the blog on hold. Things have cleared up now though, and I have a backlog of things to discuss, so let's get right to it.

The film has received a nearly unanimous positive response from critics. The main character, Precious, begins the film as a 16 year-old illiterate middle school student, but after transferring to an alternative school, she is able to find hope with the help of a teacher who encourages her to keep a journal and write in it daily.

The theme of finding redemption through writing is certainly not new to this genre of film, as Yabroff points out. Films such as Dangerous Minds and Freedom Writers have explored this territory before, although perhaps with less success than Precious. However, Yabroff wonders if all this time spent journaling wouldn't be better spent learning some mathematics.

In her article, Yabroff writes:

The idea that every underprivileged young adult harbors the soul of a Rimbaud is a favorite trope of popular culture. We don't expect our bankers and lawyers to be secret Baudelaires, but we eagerly accept the idea that every poor person has a "story," and just needs the right teacher or mentor to give it voice...

...But, contrary to what Hollywood would have us believe, the world does not reward self-expression as readily or consistently as it rewards a good head for numbers. It's hard for any writer to support herself writing. Precious's teacher should have known that, and given her a calculator along with that journal.

Stand and Deliver is one film that shows how mathematics can improve the lives of inner city youths, but as a general rule it does seem much more likely that a film will attempt to highlight the potential of students through writing rather than through math. Part of this bias is to be expected, since, as Yabroff points out, movies are written by writers and not mathematicians. Also, given Precious's illiteracy, it would make more sense to build up her fundamental reading and writing skills before asking her to pick up a math book. Even so, should we be concerned that nearly every film that shows inner city youth turning their lives around does it by emphasizing words over equations?

One may be tempted to argue that it's just harder to write a film that portrays math honestly and in a compelling way, but I think that's only true if you're a lazy writer or you don't know anything about math. Especially at the high school level, the fundamental concepts could be explained in a way that's understandable to general audience, and, dare I say it, even interesting. The end result may not seem to be as glamorous if one's education is focused on math - given the choice, I'm guessing that kids would rather be like Kanye instead of Urkel - but this just means we need to do a better job showing kids why mathematical skills are so attractive.

I for one would love to see more movies like Stand and Deliver, especially ones that follow through and show what can be done with a background in science and math. Who knows when that will happen, though. I guess we need a character with the technical know-how of Steve Urkel, but the charm and sophistication of is suave doppelganger, Stephan Urquelle. I am confident that character is out there, and am hopeful that his (or her) time will soon come. 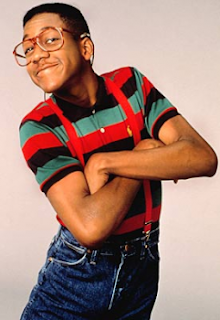 Sorry Steve - lose the suspenders, and then we can talk.