Around this time last year, I wrote up some suggestions for math-themed Halloween costumes. Based on the traffic I received from that article, I can tell that many people are desperate to integrate their holiday festivities with mathematics. For this reason, and in the interest of not breaking tradition, I thought it would be fitting to suggest a few more ideas for this year.

There are examples of mathemagicians in real life, including Arthur Benjamin, who has been the subject of an earlier article (unfortunately not for his skills in mathemagic). However, the mathemagician I have in mind is closer to the kind portrayed in the episode "Grade School Confidential" from season 8 of The Simpsons. Sadly, a clip of the scene in question isn't available online - the best I can do is show this picture, which should be enough to jog the memory of any fan of the series. 2) Mathematician Who Died in a Spectacular Fashion

Some people may think it sufficient to simply dress as their favorite mathematician for Halloween, and depending on the party, that may be true. But to give your costume that extra bit of Halloween pizazz, I recommend restricting yourself to deceased mathematicians. Not only are dead people big hits at Halloween parties, but in some cases you can incorporate the cause of death to create an even more compelling costume.

Regarding mathematicians who met an untimely demise, my top two choices would be Évariste Galois, who died in a duel under mysterious circumstances at the tender age of 20, and Jørgen Gram, who was killed by a bicycle. This is a good costume if you are going to a party with friends who think themselves political. It's also good if you really are an unemployed quant. The key here is to wear an outfit that at one point could have been quite valuable, even if it now looks like something you pulled out of the garbage. Failing that, you could always see if they make the costume below in adult sizes.

If you wanted your costume to be completely impenetrable, you could just make a t-shirt with the two 196,882 x 196,882 matrices that generate this group. Alternatively, you could simply dress up like a monster. Although technically, I suppose you'd need to dress up as a group of monsters. 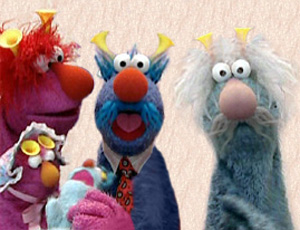 I think this would be suitable.

While many people no doubt reserve a special place in their hearts for the trefoil knot, there is certainly room for creativity here. For example, check out this dude!

This is but a small sample of what you can do to combine Halloween with mathematics. I would encourage you to think of your own ideas as well. As I'm sure you know, every holiday can be made better with just a splash of math.