I apologize for my silence over the past few weeks - I have been out of the country learning math and eating pancakes. While I get back into the swing of things, I've got a couple of points to mention that relate to earlier posts regarding our collective inability to correctly use the decimal point.

The first is a picture from a flyer advertising maid service. Here's the ad (sent in to me by a dedicated foot soldier in the army that is my readership, a.k.a. my mother): 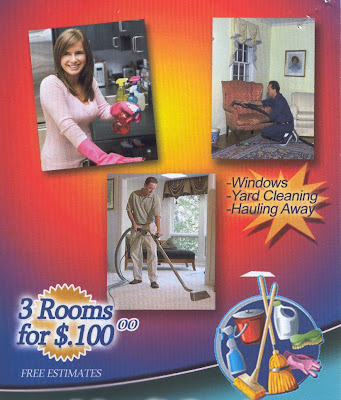 Names and phone numbers have been cropped out to protect the innocent. But in a case such as this, are there really any innocents?

Although we've seen decimal point errors on signs before, this one is arguably the most egregious of all. Presumably the intended price is $100 - if that's the case, then not only is the decimal point in the wrong place, it's not even necessary. It's hard to imagine how this mistake could've been made and then gone unchecked, but if you live in San Francisco and are looking for some cheap maid service, I can definitely hook you up. Also, if anyone else has pictures which evidence a lacking in mathematical proficiency, feel free to send them my way.

his fact has been brought to us courtesy of MythBusters co-host Adam Savage. According to this article, at the end of last month Mr. Savage was charged $11,000 for a few hours of web browsing while in Canada. This figure alone should be enough to make us skeptical of the math at work, but what's worse is that when customer service tried to explain the charges, they told savage that “data is charged at .015 cents, or a penny and a half, per kb.”

Depicted here is the effortless charm and confident sophistication that comes with a knowledge of mathematics.
Sigh. Perhaps it's time to switch to T-Mobile?