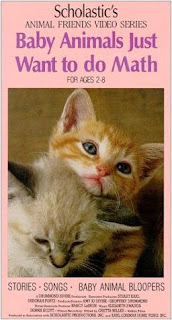 Over the past few months there have been several studies aimed at understanding the mathematical sophistication of some of our friends in the animal kingdom. This is a topic I have discussed before, but these new findings are interesting and worth mentioning.

The most recent experiment involves the cutest animal discussed so far: baby chicks. Don't let their looks fool you, my friend, for under that puff of yellow down sits a mind capable of mathematical wizardry. Surprisingly, researchers found that chicks were not only able to perform simple mental calculations, but could do so from a very young age.

But what if some calculation is required to determine which is the larger group? Researchers put the chicks in a glass cage and then hid yellow balls behind one of two screens. Sometimes they would then transfer some balls from one screen to another, in a process that the chick could see. However, the chick couldn't see how many balls were behind each screen, so the only way to keep track would be to keep track of how many balls moved from one side to another, and how many were initially on each side - in essence, to perform some basic mental arithmetic.

Surprisingly, the chicks were up to the challenge, and consistently went towards the larger group, even though the two groups were hidden from view. Here's a link to a video that shows the basics of the experiment design. 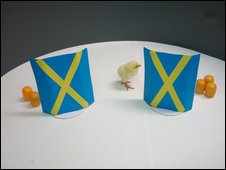 Of course, the word "baby" has several meanings. Baby chicks are described in this way because they are young, but the adjective baby could just as well describe tiny things (think of baby corn, baby back ribs, or baby math blog readership). With this interpretation, baby chicks aren't the only baby animals that want to do math - some baby fish are joining the party as well.

This is a combination Math/French joke.

Please meet the graceful mosquitofish, a species poised to revolutionize mathematics as we know it. Or, if not that, at least it can do some simple counting, according to researchers from the University of Padova in Italy.

What makes us think these fish can count? Well, the fish were put in a tank and given the choice of several doors to swim through. One of those doors had a larger group of mosquitofish (no doubt they were all studying for the Putnam exam together). First the researchers trained the fish to associate the correct door with a certain number of geometric shapes. The fish were then put in an empty tank and were allowed to move freely through any of the doors.

Does this mean that these tiny fish have some rudimentary method of counting small sets? Do they have a number sense? What does it even mean to claim that a fish can count? With further research, maybe the answers to some of these questions will become clear.

Our last foray into mathematics within the animal kingdom comes to us from what is undoubtedly the coolest looking animal mentioned so far: the rhesus macaque. Researchers at Duke University were able to have "widespread success" in getting rhesus macaques to calculate differences of whole numbers.

The main idea is similar to what was done with the chicks, although slightly more was expected from the macaques: they were first shown a collection of dots on a computer screen. The dots were then covered by a square, and some of the dots flew off screen - the monkey could see how many dots were removed, but not how many dots were remaining. The article linked above has a video showing this animation.

Afterward, the monkeys were given a choice between two collections of dots - one with the correct number of dots remaining, and one with the incorrect number of dots remaining, and were asked to pick a collection. Researchers found that the macaques performed just as well at identifying the correct difference as the human college students that were used as a control. (Then again, the macaques were rewarded for their correct answers with Kool-Aid - no such incentive is mentioned for the human controls.) 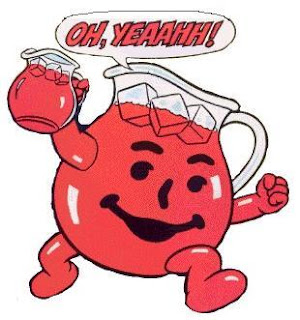 Could the secret to mathematical ability be locked inside the belly of this anthropomorphic glass pitcher? The question remains open.

With all of these stories, there is an important question to ask: why should we care? Who cares if chicks can count, or if macaques can subtract dots? More generally, why should we be bothered with questions regarding the mathematical ability of other species?

One important answer is that clues about the abilities of other species may help give us clues as to how our own ability to do math has evolved. More specifically, we can attempt to address the question: what is the role that evolution has played in the development of mathematical ability?

A few of the articles mention potential evolutionary benefits to mathematical ability. For example, in the case of the mosquitofish,

...the ability [to count] in fish is probably a "last resort" strategy that has evolutionary underpinnings, [lead study author Christian] Agrillo said.

Being able to count may require more brainpower than simply judging numbers based on size. But counting might sometimes be necessary as the fish seek safety in numbers to shield themselves from predators, Agrillo said.

This "safety in numbers" phenomenon may also help explain the chicks ability to keep track of small sets of numbers. If there is an evolutionary advantage to moving towards a larger group, then it's reasonable to guess that chicks may have developed a basic ability to keep track of relative sizes, even under difficult conditions such as the ones present in the study.

What about the macaques? In this case, there may also be an evolutionary advantage to having a knack for mathematics. The authors note that "For instance, research has shown that apes can determine at a glance roughly how much food is present in an area and decide whether to stay and eat or to move on." This ability to estimate would require at least a certain level of mathematical sophistication, one which could arguably depend upon the ability to perform simple subtraction calculations.

So, there are evolutionary arguments for the development of mathematics - but to what extent it can be said that these animals are "doing math" is a good question. And as for how to bridge the gap between their level of mathematical sophistication and abstract thought and ours, I've no doubt there is plenty of research waiting to be done.

I would start by looking into the Kool-Aid.