Those of you itching for some news last weekend may have noticed the following article, which was briefly featured on the front page of Yahoo News. In short, the article discusses the results of an experiment on the brains of roundworms. The experiment indicates that roundworms can mentally compute changes in salt levels with respect to their position in order to find food. Anyone who's taken a bit of calculus may recognize that hidden in this is the notion of a derivative. In essence, concludes University of Oregon biologist Shawn Lockery, the worms use calculus to survive. 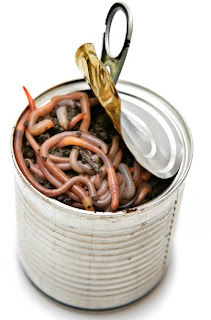 The notion that insects can do calculus is certainly good for a headline, and from a pedagogical standpoint it may be useful, although somewhat insulting to those who have trouble with math: "If worms can do calculus, anyone can!" All that aside though, isn't the claim a bit disingenuous?

The idea that calculus is related to the ability of animals to find food should make sense, and indeed the article points out that it is believed a wide variety of species (including humans) do this. Think about it: if you are hungry, and you smell a barbecue, in order to find that delicious food you will most likely walk in the direction where the smell is the strongest. As the smell increases in strength, you will hone in on your direction - and if the smell strength decreases with your motion, it is likely that you will change direction, in order to zero in on the origin of the scent.

In essence, this is what the article says roundworms do in soil: they use salt levels to determine likely sources of food. Certainly, one can model this type of behavior using calculus, where the position of the worm (or the barbecue craving human) depends on the rate of change in the food's scent at that position. The conclusion is that both species will move along the path of greatest marginal increase in scent.

But in what sense can it be said that the worms are "doing" calculus? Only in a very broad sense, it would seem. Many people who can smell out a great barbecue know nothing about calculus, so what does it mean to say that they are doing calculus in order to find their food?

Wouldn't it be more appropriate to say that both behaviors can be modeled by calculus? Then the point of the article shouldn't be that worms can do this kind of math, but that their behavior for finding food can be modeled in a relatively simple way using basic calculus.

This speaks, of course, to what many mathematicians will try and tell you: that math is simply a language in which to model the natural world. In a sense, then, calculus should be easy, because there are so many examples of it all around us. The problem is in formalizing these phenomena into an appropriate language, and in finding the best ways to teach this language once it is developed.

Hopefully this article can give mathematicians something else to point to when they assert that calculus really isn't as scary as everyone makes it out to be. At the very least, when you are next invited to a dinner party, you can look smart by saying you used calculus to find your way.